During the period leading up to Monday 8th October 2018, the Bray Parish Council's Neighbourhood Development Plan was assessed by an "Examiner", who required changes.  Additionally the Local Authority required changes. These changes diminished the power of the plan to protect our Green Belt land.

This rejection by Bray Parish Council is a victory for common sense and it is hoped will send a message to Local and Central Government, that Green Belt land should not be built upon, and that their continual interference and obfuscation in modifying the legal structures surrounding the promotion of building on Green Belt has been noted and rejected.

Many residents are fighting against the RBWM Local Development Plan, see;

The Bray Parish Council Chairman's letter points out that the money that Cllr Coppinger refers to (10% of the Community Infrastructure Levy www.gov.uk/guidance/community-infrastructure-levy  ) is only available if the houses that RBWM wish to build are actually built - as the money comes from the builders - who of course get that money from those to whom they sell the houses.  So Central Government has set up a system that bribes the local parish council to approve house building so as to get money from house buyers for local improvements, thus saving Central Government from funding these improvements.

It appears that 75% of the Levy goes for Strategic Infrastructure Development.  But as the RBWM Residents Action Group has pointed out there is little sign of any plan for the infrastructure necessary to support the house-building planned by RBWM.  However, as Councillor Elvin points out, the word "strategic" is used to designate RBWM Local Development Plan policies that over-rule Neighbourhood Development Planning policies.

The three items from the Maidenhead Advertiser are shown below. 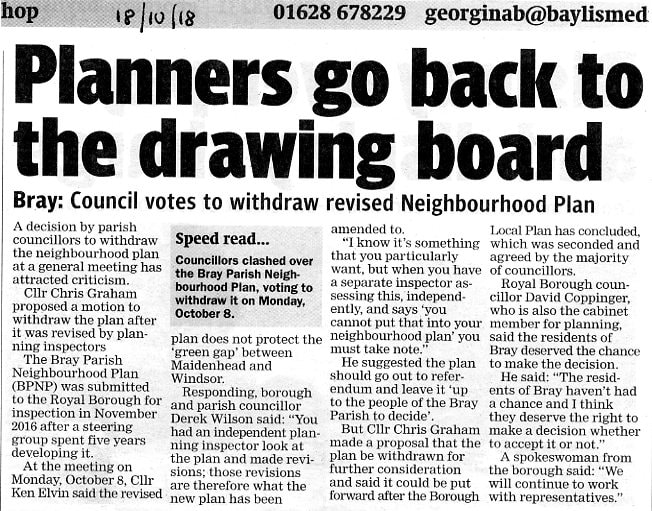 On 13th July 2017, the HRA received the letter, PDF's of which appear below, in which RBWM invite HRA to comment on the Bray Parish Neighbourhood Plan (2016-2030) Submission version (Regulation 16) Consultation.  At the present time we therefore have the Local Development Plan and the Bray Parish Neighbourhood Development Plan to comment upon.  We will see if we have time for both.  At present it is likely that comments provided for the earlier version of the BPNDP will have to suffice.  Individuals are of course encouraged to respond on their own behalf.

As the pending Bray Parish NDP and pending Borough Local Development Plan (BLDP) do not align (the BLDP requires development where the BPNDP is against it) there seems no early likelihood of there being a BPNDP.  In this latter regard the law states to the effect that an NDP cannot require less development than does the BLDP.

This being the case I do not see why the public are being asked to comment on the BPNDP, whilst it is so clearly out of alignment with the BLDP.

Logically RBWM Planning should immediately reject the BPNDP, sending it back for further development, as it does not align with the BLDP.  There should be no public consultation at this stage.
The black and red text below was written in May 2015, and now in July 2017, the submission version of the Bray Parish Neighbourhood Development Plan is being offered for consultation by RBWM.  The consultation opened on Friday 7 July 2017 and will run until 5pm on Friday 1 September 2017.   As of today 9th July 2017 I have not reviewed it in detail, but a quick scan shows that it has most of the problems that concerned me in May 2015.

Despite this being seemingly favourable to Green Belt, but which seems will never be agreed by RBWM Council; in my view the Bray Parish Neighbourhood Development Plan as written will be too easily manipulated by developers.

As I have said before now, it seems to me that Neighbourhood Development Planning was introduced to make it easier for developers to find ways to develop.

If it reaches that stage it will be passed into existence if more than 50% of those who vote, vote for it.
As of 31 March 2014 there were 6493 persons on the voters roll for Bray Parish.

At the last consultation on the Borough Local Development Plan only 1% of those entitled to vote voted.
If the same percentage applies for the Bray Parish Neighbourhood Development Plan referendum then the number of voters could be as little as 65.

So maybe only 33 people could decide yes or no for this plan.


The following text is from www.gov.uk/guidance/neighbourhood-planning--2

Can a neighbourhood plan come forward before an up-to-date Local Plan is in place?

The local planning authority should take a proactive and positive approach, working collaboratively with a qualifying body particularly sharing evidence and seeking to resolve any issues to ensure the draft neighbourhood plan has the greatest chance of success at independent examination.
The local planning authority should work with the qualifying body to produce complementary neighbourhood and Local Plans. It is important to minimise any conflicts between policies in the neighbourhood plan and those in the emerging Local Plan, including housing supply policies. This is because section 38(5) of the Planning and Compulsory Purchase Act 2004 requires that the conflict must be resolved by the decision maker favouring the policy which is contained in the last document to become part of the development plan. Neighbourhood plans should consider providing indicative delivery timetables, and allocating reserve sites to ensure that emerging evidence of housing need is addressed. This can help minimise potential conflicts and ensure that policies in the neighbourhood plan are not overridden by a new Local Plan.
Following was written in May 2015

As of 18th May 2015, the Bray Parish Council has issued for comments its draft Neighbourhood Development Plan for Bray Parish.

My present comments on it are as shown in the PDF documents that may be downloaded from the blue buttons at the end of this text.  See also my Blog, where I summarize my main concerns.

It should be noted that the full Draft Plan is more revealing of BPNDP intentions than is the Share Your Views document that was delivered to all Bray Parish households.

Following is from the "Good Councillors Guide" for Parish Councils

Neighbourhood plans and the community right to build

Through the Localism Act 2011, the Government introduced two new ways in which local councils can influence planning in their area: the neighbourhood plan and the neighbourhood (or community) development order.

• If approved, a neighbourhood plan becomes the development plan for the area, superseding the local plan (although it must be aligned with it). The neighbourhood plan can give your local community more say about where new homes are built and what they should look like. It can, for example, allocate land for industry and leisure or set retail and infrastructure policies.

• Neighbourhood (or community) development orders arise from the community right to build set out in the Localism Act 2011. Local councils and community groups have the right to propose smallscale, site-specific community-led developments. This right allows communities to build new homes, shops, businesses or facilities where they want them, without going through the normal planning application route. Any project built under the community right to build is managed by the local council or community group.

• work with the local planning authority
• take expert advice to ensure that the plan or order complies with national planning policies and strategic elements of the local plan
• engage fully with all parts of the local community
• seek approval from an independent inspector
• gain support from at least 50% of local people voting in a referendum.